I am an avid hiker. I have successfully completed the ADK46 3 season and winter rounds, the New Hampshire 48, New England 67, and the Northeast 115, plus I have through hiked the Northville Lake Placid Trail and the John Muir Trail.

This past winter I began an effort to complete my winter round of the New Hampshire 48. My plan to traverse Franconia Ridge and bag 4 peaks in one outing resulted in a successful ascent of Mt. Lafayette, Mt. Lincoln, and Little Haystack but failure to ascend Mts. Liberty and Flume. The trail from Little Haystack to Liberty and Flume was unbroken and it became unwise to break it out alone. I turned back to Little Haystack and descended via the Falling Waters trail. As I descended I did not notice the junction between the trail and a stub trail leading to Shining Rock Cliff. I breezed past the cliff and continued off trail without realizing my error until I began to posthole. Instead of turning back I decided to bushwhack toward the North where I believed the trail to be. I continued to post hole and so I switched from Microspikes to Snowshoes. Shortly thereafter I found myself falling into several spruce traps. At one point I fell thigh deep into a spruce trap with both my snowshoes getting snared in the branches of the tree.

The struggle to extricate myself from this danger was exhausting and requiring strength and flexibility that I found I possessed due to my Hardwired training. I feared for my life but never gave up and after a half hour I was free. As I stood up I remember feeling grateful that I had joined Hardwired. 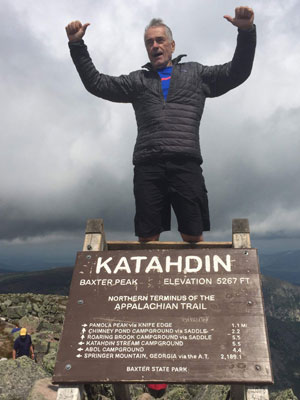